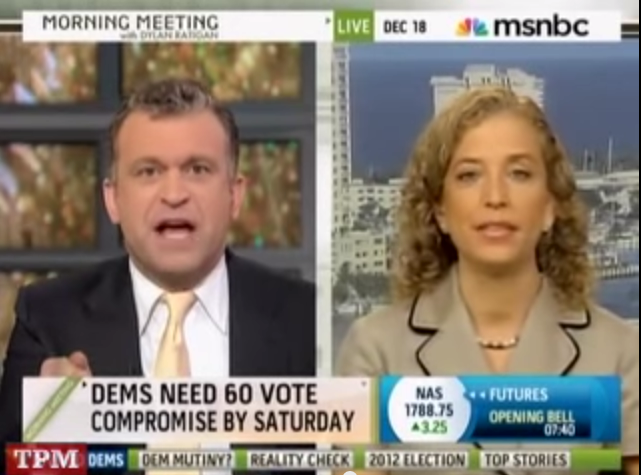 If only we all had enough money to pour into healthcare stocks to reap the greatest windfall from the Affordable Healthcare Act!

A View of the Healthcare Sector Bailout

The breathtaking rally we have seen in healthcare stocks RESOUNDINGLY displays that the Affordable Healthcare Act amounts to a bailout of the healthcare sector – a debate that some like to pretend still even exists. Recent data like what is discussed later astonishingly points to a rally in a mature sector of the economy like few have witnessed.

This data forces a recollection of an epic exchange between Dylan Ratigan and Debbie Wasserman Schultz on MSNBC from 2009.

What Dylan Ratigan was trying to explain to the esteemed Debbie Wasserman Schultz could never be understood by someone of her ilk. To understand Ratigan’s line of questioning and rightful shock and dismay, one would have to understand a basic market principle that all information is accurately communicated by market price!

Above, we see a nearly 90% increase in the S & P 500 since Dylan Ratigan vehemently attempted to provoke some kind of acknowledgement from the double-talking Debbie Wasserman Schultz. Meanwhile, the major healthcare stocks have shot through the stratosphere increasing by 225%!

The Rally and Windfall for Healthcare Players is Not Losing Steam!

So, the healthcare sector that was overcharging for its services before the Affordable Healthcare Act is now handily beating its earnings estimates and outpacing the S & P 500 by 135%. This is the case because these companies are perceived to be stronger companies and more profitable than ever. When this happens, the consumers are not bound to simultaneously receive a windfall of affordable, quality healthcare! Quite the opposite occurs!

One thought on “Caveat Emptor: Review of Dylan Ratigan’s Rage and the Healthcare Sector Bailout”